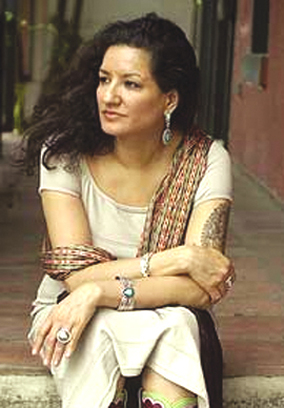 Papa was on the front porch.

Mama was in the kitchen.

to screw a light bulb into a fixture.

5Papa was watching the rain.

Mama, it’s a cyclone for sure,

he shouted to his wife in the kitchen.

Papa who was sitting on his front porch

when the storm hit

the big black oak to splinter,

tossed a green sedan into his garden,

and banged the back door

15Mama who was in the kitchen

the big oak ripped to kindling,

the green sedan land out back,

the back door slam and slam.

Mama was in the kitchen Papa explained.

Papa was sitting on the front porch.

The light bulb is still sitting

where I left it.  Don’t matter now.

Got no electricity anyway.
﻿
About the Author, Sandra Cisneros:

Sandra Cisneros was born in Chicago but they moved frequently between Chicago and Meico City. She wrote her first novel while she was still attending college. After college she began teaching poetry to high school students. Also Sandra won many awards for poetry.
What is some figurative language you can find here?